Shooting Isn’t Supposed to be Comfortable 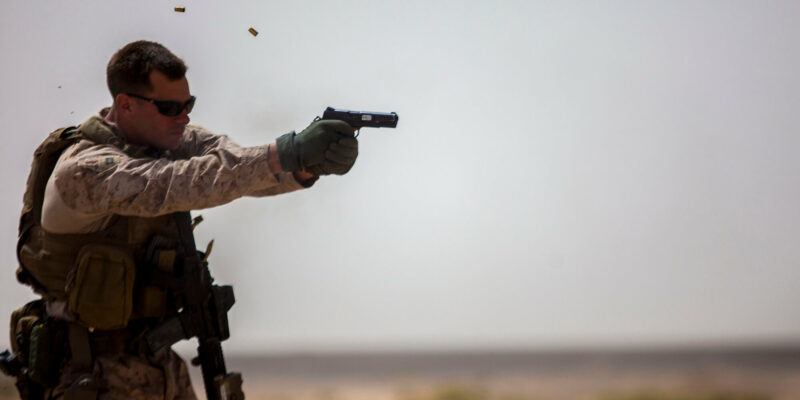 I frequently hear people say things along the lines of, “this grip feels better” or “I like how this fits in my hand better” or variations thereof. I’ve even said things like that before. However, in most instances, it’s completely irrelevant.

As the title stated, “shooting isn’t supposed to be comfortable.”

If a particular hand placement feels “good,” that doesn’t mean it is effective

If you take a first-time shooter, give them a handgun or a rifle, and tell them to shoot the target – their grip and stance will be all wrong. They’re going to use a mixture of what they see in the movies and whatever feels natural. That is what creates strange handgun grips, awkward shooting stances, and the like. It’s what feels comfortable and feels natural.

Nothing about what feels “natural” is necessarily effective at controlling recoil or putting fast and accurate shots on target.

Changing a natural grip or stance feels uncomfortable at first. It isn’t what you’re used to. It’s like always keeping your cell phone in your front left pocket and moving it to your front right pocket. It feels different and even weird. That’s natural because it is a change. Changing your grip or stance from what you are used to is the same way.

Changes to shooting technique based on recommendations from a firearms instructor feels weird. It feels unnatural and uncomfortable. But if the instructor is any good at what he/she does, the different grip or stance will provide faster and more accurate shooting.

Train through the “weird” and eventually, it will become a habit. After training away bad habits from my early days of shooting, the new and better technique feels “comfortable” and the old grip or stance feels weird. Then when I put the two on the clock and measure speed and/or shooting groups, the difference is clearly measured.

If a particular accessory feels “good,” that doesn’t mean it is effective

The same very much goes for firearms accessories and firearms themselves. If a handgun “feels” better in the hand, that doesn’t mean it is automatically a better shooter. A common complaint about Glock handguns is how blocky and uncomfortable they feel, especially when compared to contoured and “comfortable” handguns like Walther or CZ.

That doesn’t mean Glock handguns are bad and Walthers are automatically better. I don’t think anyone could make the argument that Glocks are bad guns even though they are “uncomfortable” when given to new shooters.

Glocks are fantastic handguns and are very good at what they do – regardless of “comfort.” Get enough time behind a Glock and it will feel natural and other guns might even feel weird.

Yes, firearm sizes are not universal

There is some truth to making sure a firearm fits the user. Giving a full size 1911 to a small handed child does not provide optimal ergonomics when a compact striker fire handgun might have more accessible controls to the small handed user.

But the statement of, “this grip feels more comfortable” is 100% irrelevant when it comes to manipulating and shooting firearms.

Practice and put it on the clock

Shooting technique is ever evolving. Sometime within the next few years, there will be a new strategy or new technology that requires a new strategy and we must adapt. As we move forward, we must constantly test and adapt.

If something “feels” better, put it to the test. Put it on the clock and determine if it really is better than an established technique.