Deliberate practice is the key to improving - here are some of my lessons learns and tips for becoming a better shooter, lessons learned from over 212 of training in 2018.

Table of Contents hide
1. My training numbers
2. Variety is the best way for a breakthrough
3. Taking a class from a good instructor is the best way to improve
4. A little bit of dedicated training goes a long way
5. Dry fire is the best way to become a better shooter
6. Don’t ever slack on grip pressure with a pistol
7. You can probably shoot faster than you think you can
8. You can’t become your fastest without (temporarily) sacrificing accuracy
9. Film yourself to identify room for improvement
10. Pistol mounted dots are amazing
11. Firearms training helps other areas of life
11.1. Goals for 2019
Level Up Handgun Training 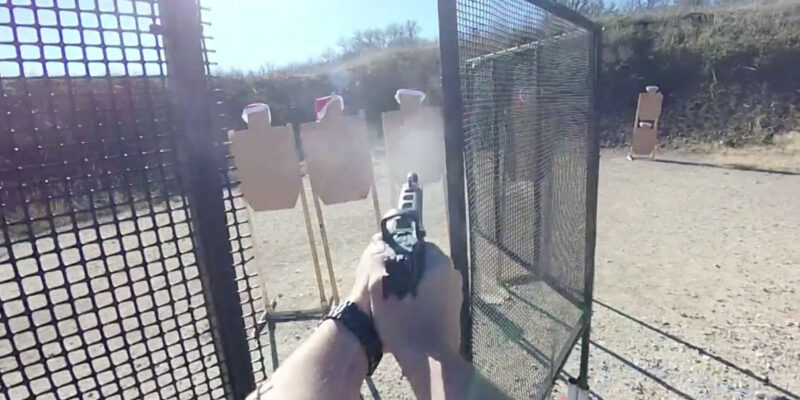 I’ve been big into firearms for quite some time now, but decided to really up my game in 2018. So I decided to log my training hours for this year as an accountability tool to keep me going throughout the year and to provide an interesting bit of review at the end of the year.

So here’s a write up of a bunch of different lessons I learned for the first time, or had seriously confirmed due to my hours of training this year.

212 hours and 31 minutes of total training, which averaged out to an average of 35 minutes a day.

While I don’t have as many quantifiable numbers for skill progression as I would like, I most definitely have had major improvements in skill this year. These improvements can be seen when reviewing my shooting videos comparing the beginning to the end of the year as well as looking at my match placement improvements. I also started the year as a high C class USPSA shooter and I’m currently flirting with Master Class classifiers. I was one A zone hit away from an M Class classifier.

This pretty clearly shows how much you can improve just through dry fire, but I definitely could have improved even more with more live fire. Although I did get in more than 27 hours of live fire due to the many classes I took. More live fire is one of my goals for 2019.

Variety is the best way for a breakthrough

All of my biggest breakthroughs last year came through some form of outside influence, most of them through some instruction.

Take classes everyone! Diversify the instructors you learn from and a good instructor will give you some nuggets of information, even if you thought you already knew it.

Trying out a new competition format or getting your hands on a different gun can be very informative. I noticed some gaps in my skills by attending some falling steel matches and it probably would have been a while before I noticed them if I only attended USPSA matches and run and gun matches. Even trying out a new gun can be educational as getting some training time in behind a CZ P10 has provided some insight into grip possibilities and an inconsistency in my reload.

Variety is the spice of life and variety is a great way to learn something new, even if that learning experience is identifying a technique flaw to work on.

If I have to choose between paying for a class or countless hours of repetitive training to overcome a particular hurdle, I’ll choose a class without any hesitation.

A little bit of dedicated training goes a long way

I totally get it, over 200 hours of training in a year is way beyond what most people would want to put into a hobby, doesn’t matter if the interests are competitive shooting, casual plinking, or conceal carry. But just a little bit of dry fire every week can make for huge improvements in your skill, and if your interest in firearms includes conceal carry – that skill could mean the difference between life and death.

Notice how I emphasized “dedicated” training – it’s a very important clarification. Going to a shooting range with shooting bays and casually putting a few boxes of ammo into a target in front of you is NOT dedicated training.

Dedicated training involves getting into a learning mindset, analyzing your technique, and seeking out ways to improve your performance. This can be done at the range through live fire or at home through dry fire.

I strongly recommend finding at least 15 minutes a week for dedicated dry fire practice and a trip to the range at a minimum, once every other month. It’s fun to get some time behind a gun, and it’s even more fun to notice an improvement in your performance.

Dry fire is the best way to become a better shooter

The key with dry fire is to be honest with yourself, self analyze your technique, and validate your dry fire training through live fire practice. Improper dry fire practice can create bad habits and hurt your growth, so don’t lie to yourself about a 0.6 draw time when you obviously weren’t even close to hitting the target.

Don’t ever slack on grip pressure with a pistol

Your forearms should be tired at the end of a good dry fire training session.

You can probably shoot faster than you think you can

I’ve found this in my own personal shooting and through other people I’m coaching. If you have strong fundamentals and good accuracy, you can almost certainly increase your splits more than you think and still retain practical accuracy.

Which leads into the next point.

You can’t become your fastest without (temporarily) sacrificing accuracy

In order to become faster, you can’t just shoot at your current speed and hope that someday you’ll be faster. You have to push your limits and shoot faster while letting your accuracy suffer – as long as you don’t lose control of the gun and shoot in an unsafe manner.

Film yourself to identify room for improvement

It may seem self absorbed to film yourself at the range or to ask a friend to film you at a match, but it’s an amazing learning tool. I don’t know how many issues with my technique or other areas I could improve I’ve found by filming myself through first and third person.

I like filming both. There’s some technique issues you can spot in third person but can’t spot in first person, and vice versa.

It’s also very encouraging to watch your old footage and see how much you have improved over the year.

I got an opportunity to run a red dot mounted pistol through a USPSA stage and was hooked instantly. All it took was that one stage. Not only do I shoot better, but it’s something I simply enjoy more.

self discipline
priority planning
learning how to learn
visual processing

I want to get in even more training this year. I had some big gaps during the summer due to planning a wedding, as well as a stint of laziness in late spring. I’ve gotten a lot better with self discipline and I don’t have a wedding to plan, so I’ll be able to stick to my training plan easier. I want to get in more classroom hours this year, but since I went to a 5 day class last year and I have a pretty full match schedule this year, I don’t know if I’ll be able to meet that goal. Finally, I will be getting in more live fire training this year though.

I’ve also recently acquired a CZ P10 that I’m going to be running through its paces to just give it a try in the production class for a little bit, and if I like it, I’ll end up switching it to my CCW gun and running it with a red dot in competition.