Safety is the most important component of an enjoyable time at the shooting range.

Table of Contents hide
1. Rules of firearms safety
2. Learn the range rules
3. Wear eyes and ears
4. Always keep the firearm pointing down range
5. Never leave a loaded gun on the shooting bench
6. Stop shooting immediately a ceasefire is called
7. Anyone can call a ceasefire
8. When leaving, completely unload the firearm, then case it
8.1. Bring a friend!
Level Up Handgun Training 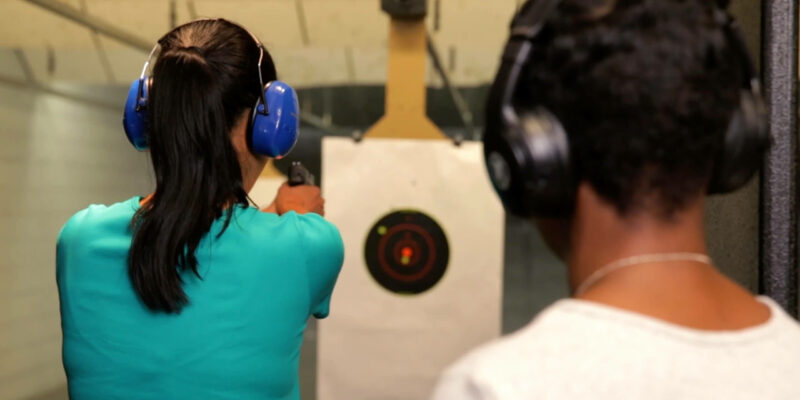 In addition to the rules of firearm safety, each shooting range has their own set of rules, and there are unspoken range etiquette rules in the shooting community. This can make for a nerve wrecking experience for first-time shooters.

Here’s some insight into staying safe on the range and being kind to your neighbors from the National Shooting Sports Foundation.

Every shooting range has their own rules beyond the rules of firearms safety. While every shooting range has pretty standardized hot/cold range procedure, ranges tend to have other rules. Common rules include no rapid fire, no drawing from a holster, only shoot at paper targets, no firearms anywhere but on the line or in a bag, and things like that.

If it is your first time at that shooting range, even if you are an experienced shooter, figure out the rules of that range. It would suck to get kicked out because you unknowingly took a rifle to the pistol line.

Eyes and ears protect people other than the shooter. Sometimes ricochets happen or small bullet fragments can fly around and can hit people who aren’t the shooter – especially when steel targets are in use.

Hearing damage does not discriminate, no matter how much of a bad ass you think you are. No one likes tinnitus and no one likes wearing hearing aids when they’re older. Wear hearing protection. Doesn’t matter if you have a gun in your hand or not.

This one seems like a “duh” component of a shooting range. But it’s so incredibly easy to accidentally point a gun up range, and it is especially easy with handguns. Be extremely mindful of the direction of the muzzle. Use your pointer finger to index the firearm and always point that finger downrange.

Never leave a loaded gun on the shooting bench

Even if the gun is on the firing line and pointed down range, never leave an unattended firearm unloaded. Should the range go cold, a forgotten loaded firearm is a safety hazard.

Keep firearms unloaded, with the slide locked open or even use a chamber flag.

And by “immediately” – I mean immediately. Don’t finish your magazine and get around to stopping shooting, immediately stop shooting as soon as you yell ceasefire.

Most likely, the range is simply going cold to swap out targets, range maintenance, or closing time. However, there might be a safety issue with someone or something being down range that shouldn’t be down range.

This is one of the reasons why electronic hearing protection is such a valuable tool at the range. While it protects hearing from the sound of gunshots, it’s still possible to hear conversations and direction from the range safety officer.

Anyone can call a ceasefire

While the range safety officer usually is the one calling a ceasefire, anyone at the range can call a ceasefire if they see something unsafe down range. For most ranges, it isn’t advisable to call a ceasefire for any reason. It’s kinda rude to stop the entire firing line because you want to put up another target at that time. But when it comes to safety, there are no exceptions.

Immediately when you see something wrong down range, call a ceasefire.

When leaving, completely unload the firearm, then case it

Bringing a frined makes any range trip more enjoyable! Training with an experience shooter also allows y’all to critique each other and become better shooters, faster.