Responsible for Every Round Fired – Police Shooting After Action Report

The 2nd Amendment is a right - but it is also a responsibility.

Table of Contents hide
1. Know the limits of your accuracy with your firearm
2. Know your backstop
3. Few circumstances justify shooting through a windshield
4. A self defender can face repercussions for acting irresponsibly
5. Seek to improve proficiency with your defensive firearm
Level Up Handgun Training 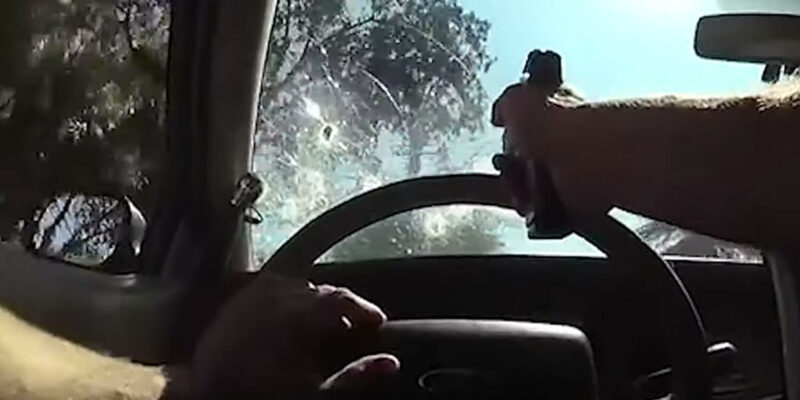 Firearms are the most effective tool for self defense, we know that from the CDC. But their outstanding defensive capabilities can also be mishandled resulting in innocents being injured. That is why exercising our 2nd Amendment rights comes with the responsibility to handle and use our firearms, well, responsibly. We are responsible for any mistakes we make with our firearms and it is important that we don’t let innocents face the repercussions for any irresponsible behavior.

To delve into this very important topic, let’s take a look at an officer involved shooting. In this incident, officers are called to investigate a possibly dangerous situation. They are told this man is armed with a gun and a knife, and he decides to run waving a gun around. The gun turned out to be a CO2 powered airsoft gun, but the officers didn’t know that. The officers are lead on a vehicle chase where they shoot at the suspect who is waving around the fake gun. The officers fatally shot Eliuth Penaloza Nava over the course of the incident. Read the full news story for more information about the incident.

The subsequent investigation ended with the officers not being charged with a crime. However, the DA’s letter called their conduct “alarming and irresponsible.”

Here’s a video from Active Self Protection with discussion about it from Chuck Haggard, the “Legendary Lawman” to review the incident.

I strongly recommend watching the full incident and the subsequent commentary. While the average citizen does not have the obligation to pursue someone, nor would the law protect the citizen under self defense circumstances because pursuit means it’s no longer self defense, analyzing this incident creates a lot of important food for thought.

Know the limits of your accuracy with your firearm

This is a 100% contextual limitation. How good is your shooting stance/position? How big is the target? What distance? What firearm? Is movement involved? These are all questions that go into your confidence in consistently hitting a target and every self defender should be able to reasonably know their hit rate under different conditions.

This means all self defense shooters should practice with their firearm outside of your comfort zone. Make the target smaller and farther than you normally shoot. Not only will this make you a better shooter, it will help you learn your limitations.

Almost all of us are in hometown America where everyone around us is just going about their lives. Everyone wants to get home to their loved ones and everyone especially doesn’t want to get shot just because they were in the wrong place at the wrong time.

In addition to knowing your limitations with your defensive firearm, you must avoid extreme target fixation and be sure of what is next to and behind your target. Shoot throughs and near misses can seriously injure or kill an innocent bystander.

And by close, I mean really close. Chuck has fired from the drivers seat at a target 7 yards away and completely missed the target, that’s how much bullets can get deflected by a windshield.

If you are in your vehicle, the gas pedal is most likely your best defensive tool.

A self defender can face repercussions for acting irresponsibly

Just because you are justified to use lethal force does not mean your application of lethal force is above all scrutiny. If you act recklessly and irresponsibly, you can still face jail time even if your life was at risk.

Seek to improve proficiency with your defensive firearm

The 2nd Amendment is a right, but it is also a responsibility.

If you wish to exercise your 2nd Amendment right by carrying a firearm, it is your responsibility to become proficient with your firearm. Just because you passed a LTC/CCW test does not automatically mean you are proficient. I’ve passed the Texas LTC Shooting Test with my eyes closed.

Seek out instruction and practice. Use dry fire training to practice in an economical manner. Come to a shooting match to put your skills to the test and get better. Besides, practicing with your firearms is fun!