Passing the Texas LTC Test With My Eyes Closed

Table of Contents hide
1. I did it to prove to myself I could
2. LTC/CCW tests are minimum standards
3. Training is something all responsible conceal carriers should pursue
4. Rights shouldn’t have barriers
4.1. Uncut footage of passing the Texas LTC class with my eyes closed
Level Up Handgun Training 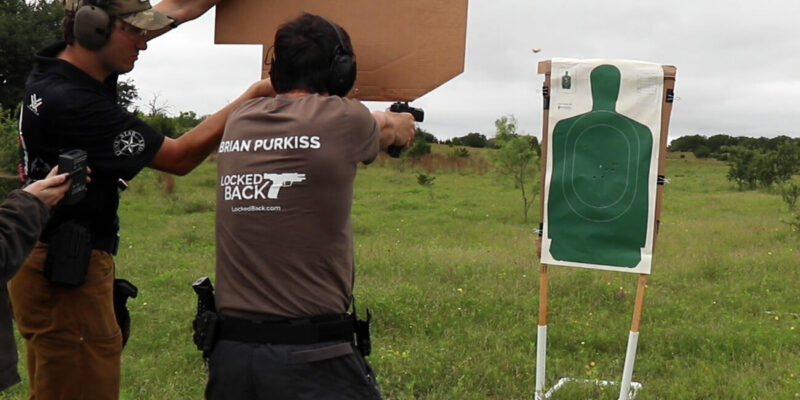 It’s not uncommon to hear people claim we need tests to make sure people can exercise their 2nd Amendment rights. They propose tests to make sure people are “fit” to own/carry a gun. They forget that these types of tests originate in disarming minorities, they failed to deny a license to the Pulse Night Club shooter, and they were used to deny Martin Luther King Jr a gun license. On top of all of that, these types of tests have very low standards. It’s pretty easy to pass all of them.

To prove that, I pass the Texas LTC shooting test from a holster with my eyes closed.

The Texas LTC/CCW shooting test to be able to conceal carry or open carry a handgun is one of the harder conceal carry shooting tests to pass in the US. It involves shooting a total of 50 rounds – 20 rounds at 3 yards, 20 rounds at 7 yards, and 10 rounds at 15 yards. They are shot in a few different strings of fire with their own time limits. The target is huge and the distances aren’t far.

I did it to prove to myself I could

I have long taught that conceal carriers should be able to close their eyes, draw their gun, and open their eyes to see their sights lined up and their gun mostly pointed at the target. One day I realized I had gotten good enough that I could probably pass the Texas LTC/CCW/CHL test with my eyes closed. It took some time to find a range that would allow me to do it – and by range, I mean private property.

So I did this so I could prove to myself that I could and what I was teaching had merit.

If you have passed the Texas LTC test, or any other conceal carry test for your state, please do not take that as sufficient proof of competency with a handgun. These tests simply prove minimum standards, and these standards are at a very low bar.

2nd Amendment rights are just that, rights. But they are also a responsibility. If you choose to own and carry a firearm for self defense, you have the responsibility of making sure you are proficient with your tool. You need to be proficient enough that you can reasonably end a fight without injury to yourself or others around you.

Training is something all responsible conceal carriers should pursue

These license to carry standards are incredibly easy to pass. I’ve seen people pass them after picking up a handgun for the first time. This is why all conceal carriers should pursue training to become better – both in the form of instruction and practice on your own. Most firearms owners over estimate their proficiency in my experience and everyone has room for improvement. I strongly encourage people to take a class and train outside of the classroom.

After learning good technique, it’s important to practice on your own. Musicians don’t go to a class once or twice a year and never pick up their instrument. Getting better means practicing – and practicing doesn’t involve just random shooting at paper targets. Quality practice means deliberate practice – goals, self analysis, and determining how to best improve.

Thankfully, dry fire is one of the most effective ways to become a better shooter – and it is free. World champion shooters recommend dry fire – so it’s something everyone can do to get better. Simply go through the motions of shooting a gun, just do it without live ammo. Check out the above link for more tips on how to dry fire effectively.

Ever had to go renew your Free Speech License? No? What about your Freedom of Religion License? Not that either? What about paying for your poll tax? Haven’t had to do that? It’s because none of our other rights require asking or paying for permission from the government to exercise them.

The origins of gun control in America is literally in racism. The original gun control laws were used to disarm recently freed slaves and other people deemed unworthy. Many of the massacres of the Native American people by the US Government came about due to firearms confiscation.

Law abiding citizens should not have to ask or pay for our rights – and that includes our 2nd Amendment rights.

We need to fight for our rights so the 2nd Amendment can be enjoyed by everyone – not just people who pass whatever government permissions happen to be in place. Please consider donating to a pro 2nd Amendment organization and help restore our rights.